What Is An Average GRE Score

Almost everyone who takes the GRE wants to know ahead of time what they “need” to score in order to get into grad school. Of course it all depends on what type of program and what particular school, but there are ways to determine what an “average” score is and what you would need to be above that and better your chances of getting into the program you want. 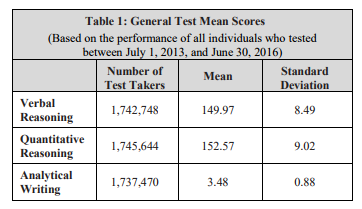 The GRE test is broken down by percentile of other test-takers so the average would be right at 50 percent which is (basically) 150 for verbal and 152.6 for quantitative reasoning. To further explain the scores, an example of above average score for verbal would be 155 which is at about 69 percent. That means that you would score above 69 percent of other test takers in that section.

Most scores fall around the average (either 150 or 152.6) so the scores just above and below this area include fairly small percentile changes when compared to farther away from the average. This can be seen in the fact that almost half of all the test takers will score between 145 to 155 in the verbal area. It’s only a range of ten that includes over 40 percent of test takers while the range of 160 to 170 only contains barely more than 10 percent (a range from 87 to 99 percent).

The analytical writing section is scored separately on a score of 1.5 to 6.0 and the average is about 3.6. Again, the vast majority of test-takers score somewhere in the average range.

Of course these “averages” are simply the average for overall GRE test-takers. This doesn’t reflect the averages of individuals actually in grad school or in various programs. Research into the respective school should reveal required scores or at least a baseline of accepted students in the past.

Finally, anyone preparing for the GRE should simply ask themselves the question “What’s the best score I can get?” While knowing the average and requirements might be nice, everyone should push themselves to the very best of their own ability and be proud of their own accomplishments.